There are lots of online tools for checking your ISP provided internet speed. Most are web based interfaces and there are some great ones out there. The most popular is probably www.speedtest.net, but we also have www.fast.com, www.speedof.me, … even Google let’s you do it directly from its search page (you have to search using US-based google.com, not any of Google’s other country TLDs).

You can also do it from the Linux command line using a few open source tools. Here is how to do it…

(Note that all my speeds are low here since I’m downloading in the background!)

You can download the python script to run the speedtest.net Linux command line interface tool from here (obviously python is a pre-requisite):
https://github.com/sivel/speedtest-cli

You can install using git, pip/easy-install or download with wget. I’m going to use pip

I’ve found the best way to run this is to use the bytes option, and pick a server relatively local (you can find the available servers by running speedtest-cli --list , probably worth grepping to narrow it down to your country, speedtest-cli --list | grep "Great Britain" ):

And comparing to the web interface we see: 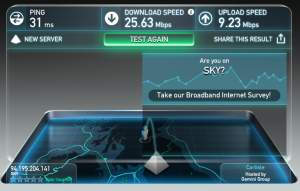 Download from http://dl.getipaddr.net/ or just run these commands to download and run once you’re in the folder you want to keep the script in:

This script will keep looping through different servers until you cancel it (Ctrl+C), at least I’ve never been patient enough to let it go long enough to finish on its own!

I’ve found that speedtest.sh tends to show much lower speeds than the other tools.

[Note netspeed.sh has now been depreciated (the author commented on this post below). You can find his new improved tool at https://git.io/speed instead.]

All credit to this Hak5 youtube video. They go into a lot more detail on this stuff in the video.